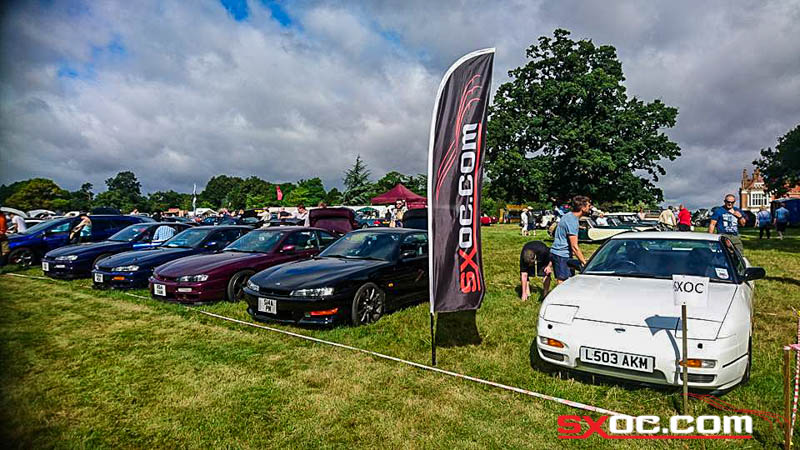 The stand was full and nothing failed to disappoint! It was scorching weather with amazing cars from Ferrari’s to 200sx’s!

As you may have seen, the club was on form with the banter. This time it was Daz’s turn as usual to be the “butt” of the joke, as couple of members decided to decorate his car as a welcome back initiation, after almost 3 years of it being off the road  – Click here for his project thread. – http://sxoc.com/vbb/showthread.php?441292-My-S14a-build/

Here are some of the pictures of our tomfoolery.

There was plenty to see and do as always, a concourse run for a few cars with the ow ners speaking about each one, a country dancing display and a falconry show where, as per every year, one of the birds wouldn’t come down from a tree! Something for all the family and trade stands too.

I along with others got majorly sunburnt so let ‘the boy’ chill out in the shade (aka the boot).

By 4pm most people had left apart from a few hardcore show goers that went for a stroll around the acres of gardens.

Thanks to all that came and of course to Helmingham Hall who were as always amazing hosts and a credit to car events, it all ran very smoothly. Until next year, Helmingham.

Japfest 2016 at Silverstone. It was the first big show of 2016 and besides the nightmare of a new ticket system that Chris had to deal with, what an awesome start to the show season for the club.

Considering the date being a month earlier than usual we pulled together and managed to have over 30 cars on show and some extremely nice examples at that!

We even had the pleasure of Def’s rx8!!!

Silverstone did a great job of hosting the event and the BDC drifters put on some incredible drift demo’s so a huge thanks to them.

Thank you all for attending and hope to see you all again at more events throughout the year. And a massive thanks to ChrisCooke for organising as it wouldn’t of happened without you.

Written by
Staff
Posted in
Event Report, Events, Feature
So after years of the Dorset and Hants area of the sxoc being somewhat dead, we as a club finally pulled together to make this the biggest and best event the area has seen for many years.
It took months of preparation, many pm”s and contacting people through friends and social media and the end result was very rewarding. Simply Japanese is an annual event held at Beaulieu that is growing each year!
Some of the clubs involved include Dorset modified car club, RX8 Owners club, Just jap car club, Nissan sports, Subaru impreza owners club, Skyline owners and many more.
SXOC stand had an impressive 21 cars on show, with a couple R32″s and an R34, an Mr2, Starlet Glanza and Dannyboi”s Mazda. We are looking to make next year”s event even bigger than this year as it isn”t just a car show it is a great family day out!
I would like to take this oppurtunity to say a massive thank you to everyone that made the effort to make this such a good event, especially to the people that travelled from other areas even with all the trouble they encountered on the journey (Overnutter)
For more pics and info from the day click here
Rich – aka pointz, Dorset and Hants Rep